Becoming a Central Bank : how the English financial system matured dramatically in the first decade of the 19th century

September 22, 2021 | Blog
Home > Becoming a Central Bank : how the English financial system matured dramatically in the first decade of the 19th century

This blog is based on the author’s forthcoming article in the Economic History Review which has been published on early view: https://onlinelibrary.wiley.com/doi/10.1111/ehr.13110.

I examine the Bank of England Court of Directors minutes to document how the Bank transformed into a nascent central bank in the first decade of the nineteenth century – earlier than is usually assumed. Following Ugolini (2017) and Bindseil (2019), this paper focuses on the more pragmatic question: What did the central bank do? To address this question, my research assembles primary and secondary sources to detail the institutional environment in which the Bank operated. Particular emphasis is devoted to the close relationship between bills of exchange and the banking system in the early nineteenth century.

By the start of the Restriction, the payments system had largely matured from tradesmen’s credit to a reliance on professional financiers. The combination of the maturing financial market and the Restriction of payments facilitated growth in the money supply between 1797 to 1804, and from 1809 to 1810. Bankers’ acceptances played a key role in the second episode and in the destabilizing dynamics leading to the 1810 crisis. Figure 1 demonstrates that the Bank suffered dramatic losses in this crisis. 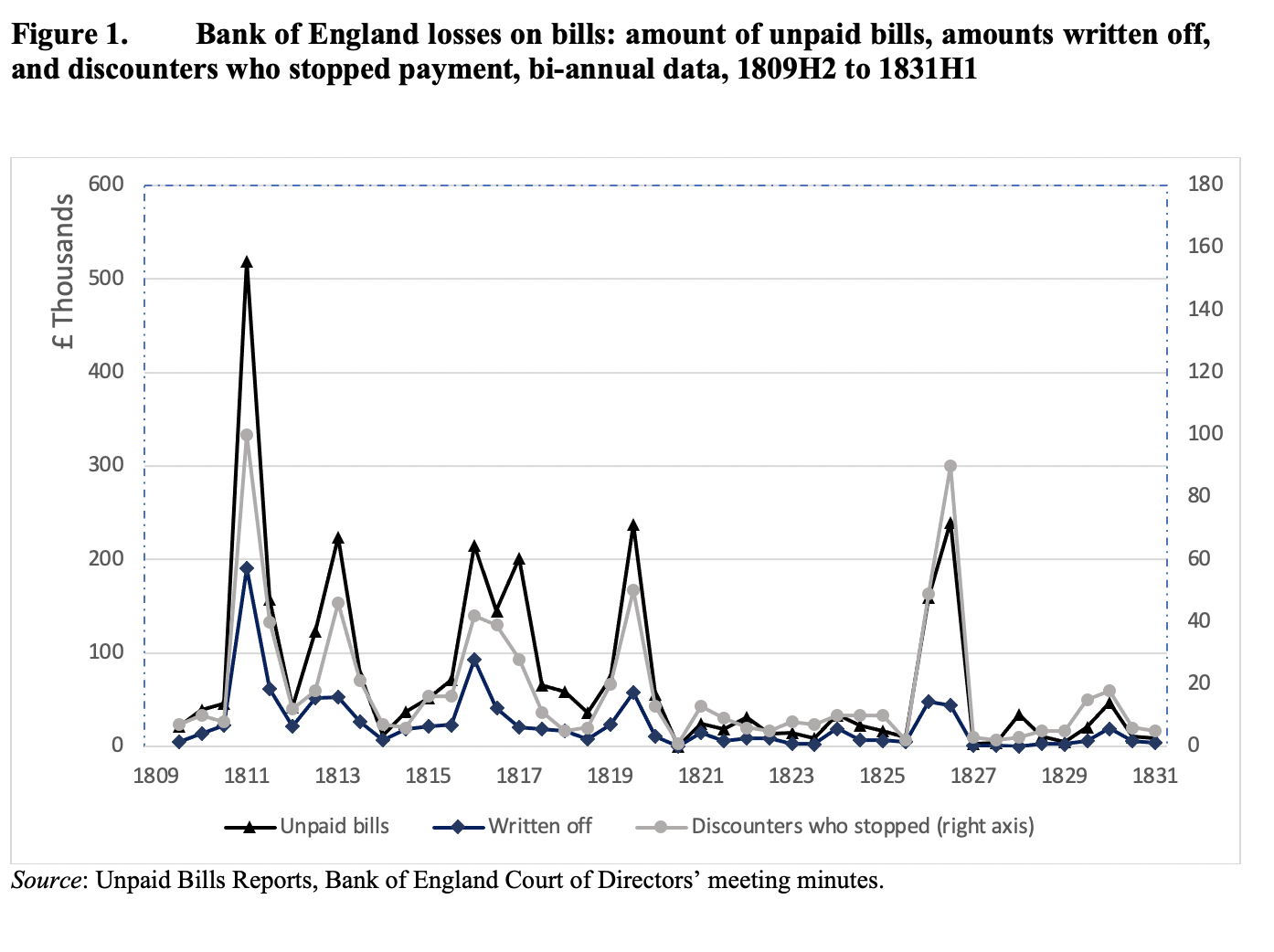 Preceding the 1810 crisis, the directors of the Bank reached a consensus on supporting financial and monetary stability in the London money market.  However, they were subsequently  deadlocked by a classic division between ‘hawks’ and ‘doves’.  The Bullion Committee report, which supported the hawks  was timed to influence the debate amongst the directors.  This may be the only case where a government investigation into mismanagement of the money supply occurred before a crisis.  Ultimately, the Restriction and the 1810 crisis transformed the Bank’s credit policies.

This paper contributes to three themes: the role of bills of exchange in the English financial system, the evolution of the Bank of England into a central bank, and the Bullionist controversy. This detailed study of the early nineteenth century can help scholars distinguish this period from different environments such as the mid-eighteenth century and European practice.   Indeed, during the eighteenth century,  the law and practical use of bills in England diverged from the continent. Further, my research  uses quarterly data to explain the results reported in O’Brien and Palma (2020), and it provides additional evidence for subsequent research Palma (2018a, 2018b) that growth in the money supply stimulated economic activity.

Turning to central banking, this paper follows Ugolini (2017) to demonstrate that, at a much earlier period, the Bank acknowledged its public responsibilities — as demonstrated by the Bank’s policies during the Restriction.  Indeed, the ‘elaborate system of reporting [that] enabled [the Bank] to control its exposure to both discounters and acceptors,’ reported by Flandreau and Ugolini (2013) for the 1860s, was explicitly designed to address early nineteenth century problems that confronted the Bank.   Moreover, as Table 2 demonstrates,  the expansion of last resort lending in the first decade of the nineteenth century was associated with an increase in the Bank’s losses,  contrary to the claims made for later years  Bignon et al. (2012) and Ugolini (2017). 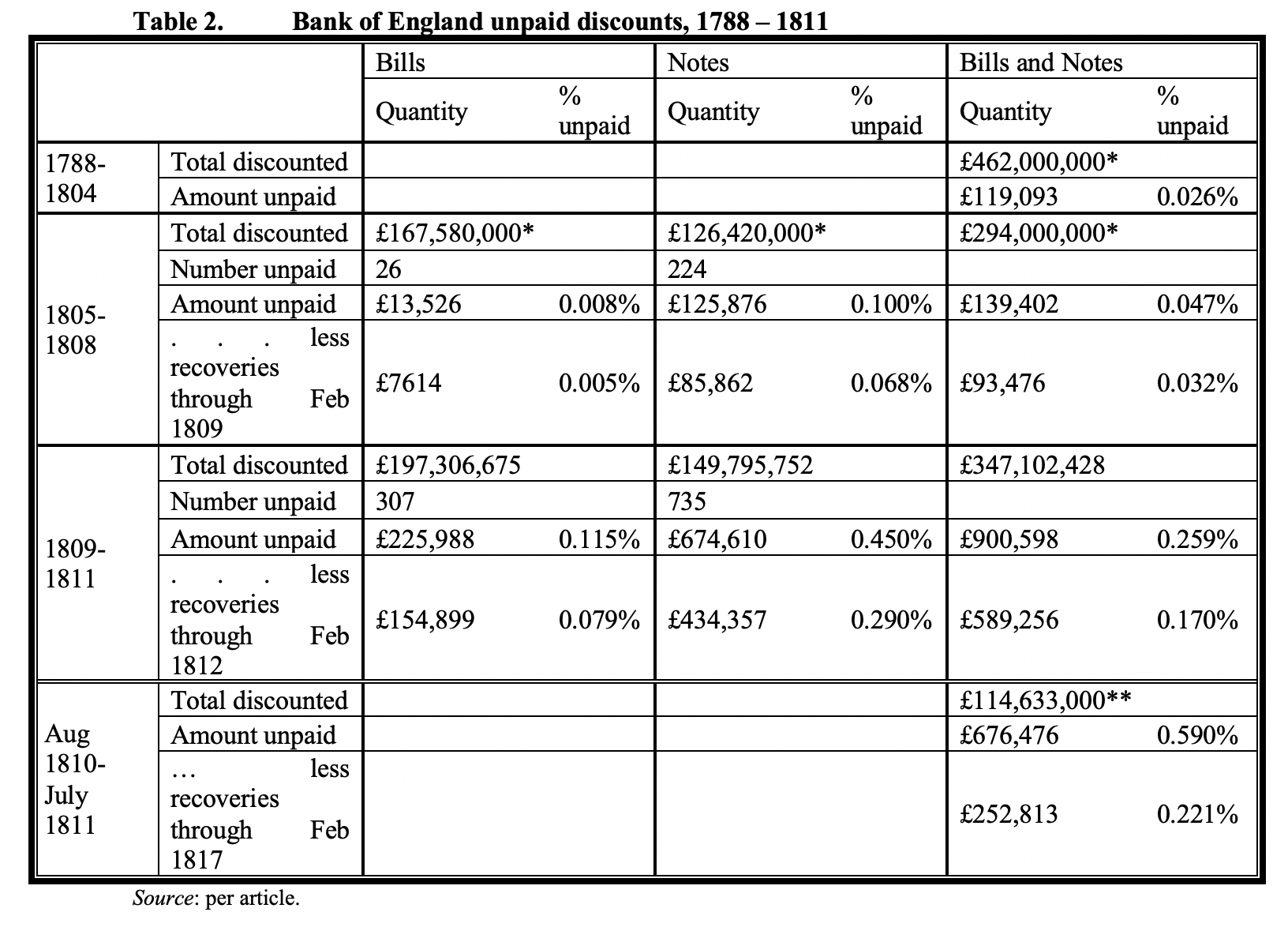 Overall, this paper provides substantial evidence that in the early years of the nineteenth century the English banking system – including the money markets and central bank – was most susceptible to the Bank’s policies. The Bank gradually understood its responsibility to the wider economy and it effected policies  designed to promote monetary and financial stability.

Marc Flandreau and Stefano Ugolini (2013). “Where It All Began: Lending of Last Resort and Bank of England Monitoring during the Overend-Gurney Panic of 1866”, in Michael Bordo and William Roberds ed. A Return to Jekyll Island: The Origins, History, and Future of the Federal Reserve 113-165.