The full article from this post was published in The Economic History Review, and it is now available on early view at this link

By Peter Scott (Henley Business School at the University of Reading)

Most of our information on wealth distribution and top incomes is derived from data on wealth left at death, recorded in probates and estate duty statistics. This study utilises a unique list of all living millionaires for the 1928/9 tax year, compiled by the Inland Revenue to estimate how much a 40 per cent estate duty on them would raise in government revenue. Millionaires were identified by their incomes (over £50,000, or £3 million in 2018 prices), equivalent to a capitalised sum of over £1 million (£60 million in 2018 prices). Data for living millionaires are particularly valuable, given that even in the 1930s millionaires often had considerable longevity, and data on wealth at death typically reflected fortunes made, or inherited, several decades previously. Some millionaires’ names had been redacted – where their dates of birth or marriage were known – but cross-referencing with various data sources enabled the identification of 319 millionaires, equivalent to 72.8 percent of the number appearing on the millionaire list.

The tax year 1928/29 is a useful bench-mark for assessing the impact of the First World War and its aftermath on the composition of the super-rich. Prior to the 20th century, the highest echelons of wealth were dominated by the great landowners; reflecting a concentration of land-ownership unparalleled in Europe. William Rubinstein found that the wealth of the greatest landowners exceeded that of the richest businessmen until 1914, if not later. However, war-time inflation, higher taxes, and the post-war agricultural depression negatively impacted their fortunes. Meanwhile some industrialists benefitted enormously from the War.

By 1928 business fortunes had pushed even the wealthiest aristocrats, the Dukes of Bedford and Westminster, into seventh and eighth place on the list of top incomes. Their taxable incomes, £360,000 and £336,000 respectively, were dwarfed by those of the richest businessmen, such as the shipping magnate Sir John Ellerman (Britain’s richest man; the son of an immigrant corn broker who died in 1871, leaving £600) with a 1928 income of £1,553,000, or James Williamson, the first Baron Ashton, who pioneered the mass production of linoleum – second on the list, with £760,000. Indeed, some 90 percent of named 1928/9 millionaires had fortunes based on (non-landed) business incomes. Moreover, the vast majority – 85.6 percent of non-landed males on the list – were active businesspeople, rather than rentiers. This is shown in Table 1 (for those firms that generated more than one millionaire fortune). Even those millionaires shown as “not in trade” were close relatives of businesspeople whose fortunes were made in these firms.

“Businesspeople millionaires” were highly clustered in certain sectors (relative to those sectors’ shares of all corporate profits): tobacco (5.40 times over-represented); shipbuilding (4.79); merchant and other banking (3.42); foods (3.20); ship-owning (3.02); other textiles (2.98); distilling (2.67), and brewing (2.59). These eight sectors collectively comprised 42.4 percent of all 1928/9 millionaires, but only 15.5 percent of aggregate profits. Meanwhile important sectors such as chemicals, cotton and woollen textiles, construction, and, particularly, distribution, are substantially under-represented. 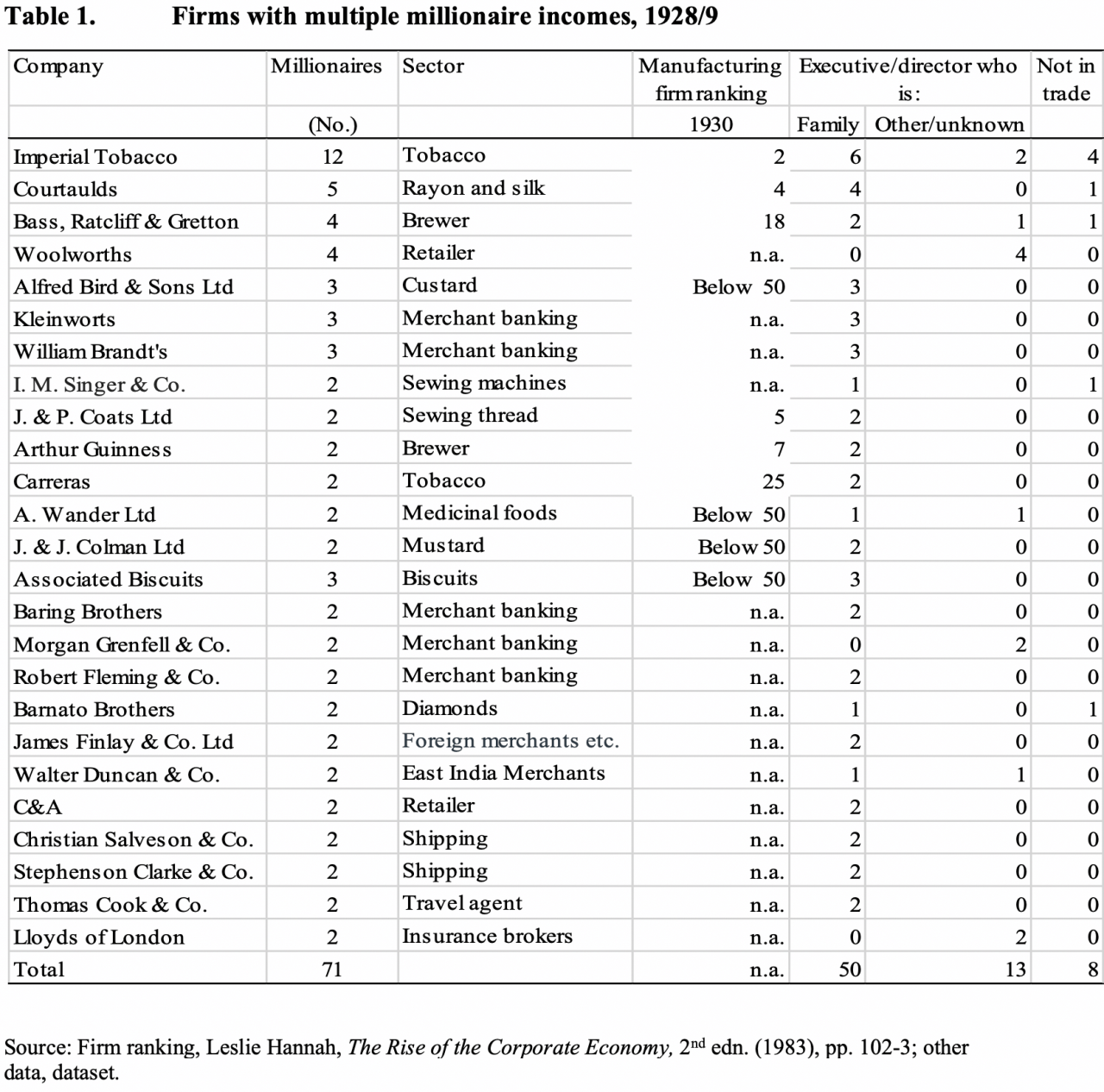 The over-represented sectors were characterised by either rapid cartelisation and/or integration which, in most cases, had intensified during the War and its aftermath. Given that Britain had very limited tariffs, cartels and monopolies could only raise prices in sectors with other barriers to imports, principally “strategic assets”: assets that sustain competitive advantage through being valuable, rare, inimitable, and imperfectly substitutable. These included patents (rayon); control of distribution (brewing and tobacco); strong brands (whiskey; branded packaged foods); reputational assets (merchant banking); or membership of international cartels that granted territorial monopolies (shipping; rayon). Conversely, there is very little evidence of “technical” barriers such as L-shaped cost curves that could have offset the welfare costs of industrial combination/concentration through scale economies. Instead, amalgamation or cartelisation were typically followed by rising real prices.

Another, less widespread but important tactic for gaining a personal and corporate competitive edge, was the use of sophisticated tax avoidance/evasion techniques to reduce tax liablity to a fraction of its headline rate. Tax avoidance was commonplace among Britain’s economic elite by the late 1920s, but a small proportion of business millionaires developed it to a level where most of their tax burden was removed, mainly via transmuting income into non-taxable capital gains and/or creating excessive depreciation tax allowances. Several leading British millionaires, including Ellerman, Lord Nuffield, Montague Burton, and the Vestey brothers (Union Cold Storage) were known to the Inland Revenue as skilled and successful tax avoiders.

These findings imply that the composition of economic elites should not simply be conflated with ‘wealth-creation’ or prosperity (except for those elites), especially where their incomes include a substantial element of rent-seeking. Erecting or defending barriers to competition (through cartels, mergers, and strategic assets) may increase the number of very wealthy people, but is unlikely to have generated a positive influence on national economic growth and living standards — unless accompanied by rationalisation to substantially lower costs. In this respect typical inter-war business millionaires had strong commonalities with earlier, landed, British elites, in that they sustained their wealth through creating, and then perpetuating, scarcity in the markets for the goods and services they controlled.