Do the rules of the game matter? Monetary regimes and financial stability since 1920

April 6, 2017 | Blog
Home > Do the rules of the game matter? Monetary regimes and financial stability since 1920

Financial crises come in many shapes and forms. They can occur in stock markets, private or public debt markets, housing markets or any asset class you may think of (yes, even tulips). Attempts to predict the timing and asset class where the next crisis will show its ugly head have been unsuccessful in part due to the amount and diversity of forces at play. The veil of uncertainty that surrounds them and the negative effect they have on long-run economic growth makes the study of crises both pertinent and challenging.

The research, presented at the 2017 EHS annual conference, studies one possible factor that may be related to the frequency and intensity of booms and busts in stock and credit markets: the rules of the game. It studies the possibility that the monetary regime, competing decisions on monetary policy, exchange rates and capital flows, is related to the evolution of financial aggregates to different time horizons. The underlying idea, following the Bank for International Settlements, is that different regimes endow the financial system with varying levels of elasticity, allowing for imbalances to accumulate in the form of booms and unwind in the form of crises at different rates and intensity.

This is a stepping stone in the road to answer a question that has troubled policy makers for over a century: Should authorities and regulators intervene in the market trying to anticipate crisis, or is the best course of action to react once crises ensue? If regimes do play a role, and the channels of accumulation of imbalances are contingent on the institutions at play, it is possible that authorities may have a wider array of tools at their disposal to avoid the accumulation of financial stability.

In order to do it, the research proposes three new measures for the evolution of the stock market and credit aggregates since 1922 until today for France, Germany, Italy, the Netherlands, Sweden and the UK. The new measures, the Boom Bust Indicators – BBIs, result from a variation on our earlier work, and allow us to characterize booms and busts depending on their effects to different horizons: explosive ones affect the short-run (up to one year); expansive ones have an effect up to the third year; and pervasive ones show effects after 5 years.

BBIs complement what has been traditionally done in the financial crisis literature. They depart from decomposition techniques such as spectral analysis in that they use all the information in the original series instead of extracting a part of the data. They depart from turning point analysis and other crises dating techniques since the outcome is a triplet of continuous series instead of a summary sequence of dates for booms and crashes. They complement measures like the severity index which pays unduly little attention to explosive booms and busts to the benefit of lengthier events. Finally, the measures allows for comparisons across countries and time. A sample of the three measures for the UK stock market is presented in Figure 1. 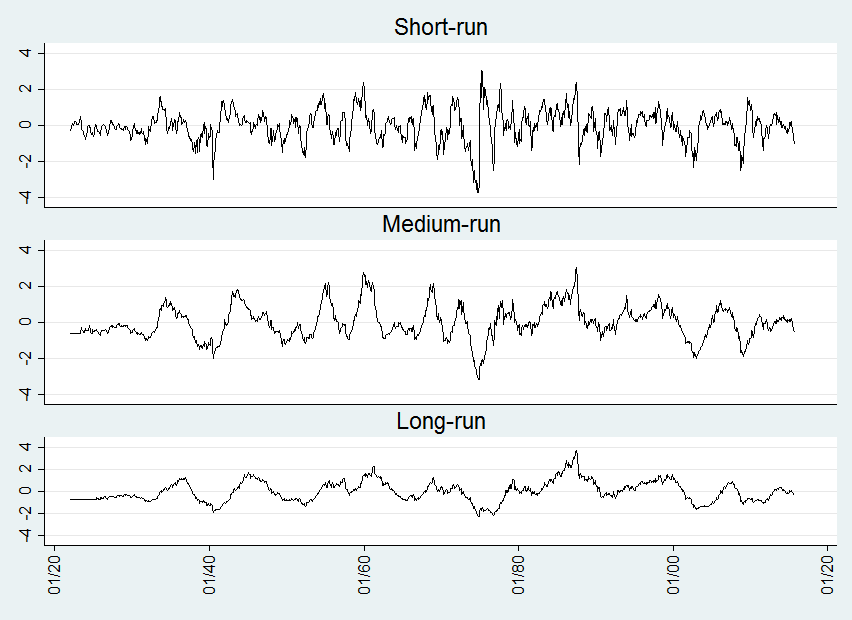 The research studies the evolution of BBIs for credit and stock markets under five different regimes: the gold exchange standard (GES), the fixed peg rate of Bretton Woods (PEG), the managed float of the Exchange Rate Mechanism (MF), the periods of free floatation (FF) and the European Monetary Union (EMU). To characterize the differences in behavior under each regime we pool all countries together and measure the statistically significant differences in means and volatility for BBIs under each regime. They were graphed in a scatter plot, where the X axis represents volatility and the Y axis represents the mean. Results for the long-run measure are presented in Figure 2. The farther a regime appears from the origin, the more elastic it is as it coincides with stronger variability in the indicator.

Figure 2: Regimes according to mean value and volatility of long-run BBIs

Although the mechanisms through which the regime impinges on the boom-bust cycle of credit and stocks still remains unclear, it is possible to highlight several findings. First, there is a role for the monetary regime on the evolution of asset prices and credit. Second, some sort of currency peg, with commitments to exchange rate stability and capital controls, favors financial stability both in the short and long run. However, stricter pegs are favorable for controlling stock market booms but increase both short run and medium run volatility of credit growth. Finally, a nominal anchor of the currency, through the gold exchange standard or the European Monetary Union, appears to be insufficient in generating financial stability as they coincide with booms and heightened volatility in stock and credit markets.