April 21, 2022 | Blog
Home > Examining the ties between engineer Kenneth Cantlie and a network of people associated with the Leith-Ross Mission in the 1930s China

by Leena Lindell (University of York)

This blog is based on research made possible by the Research Fund of Graduate Students, funded by the Economic History Society.

My research centres on a figure who led a transnational life over four continents: Engineer Kenneth Cantlie (1899-1986), who was trained in Britain,  and worked on the railways of Argentina, India and China in the 1920s and 1930s (Figure 1). Cantlie became embroiled in the diplomatic and economic affairs of British colonies and treaty ports.  Later in his career, Cantlie promoted railway exports to Europe, China, Africa, and South America. Adopting a biographical approach, I  examine the connections and social networks forged over the years, which he utilised to advance technological knowledge and his personal affairs.

Currently, my research involves the collection of relational data from a diverse range of archives, focused on two periods in Cantlie’s life: in the 1930s, when he was employed by the Chinese Ministry of Railways and linked into social networks in Shanghai and Nanking; and in the mid-1950s, when Cantlie travelled to China to promote British businesses while unofficially supporting efforts to improve diplomatic relations between Britain and Communist China.  Specifically, I focus on the connections Cantlie forged in the Western and Chinese communities which included the family of Kenneth Cantlie’s godfather, president Sun Yat-sen; the influential Kadoorie family, who owned diverse businesses in Hong Kong and Shanghai, and Sir Frederick Leith-Ross, a high-ranking British Treasury official involved in an economic mission during 1935-1937 which sought to stabilise the Chinese currency and reduce the risk of a Sino-Japanese war.  I  reconstruct Cantlie’s networks using social network analysis.

The primary resource for this project is the Kenneth Cantlie Archive (CANT) at the National Railway Museum, which also holds one of the largest engines in the National Collection, the Chinese Railways KF class 4-8-4 locomotive designed by Kenneth Cantlie (Figure 2). The Cantlie archive is a unique collection of personal and business papers that illuminates the varied nature of the engineering profession.  The correspondence in this archive reveals Cantlie’s role as a technical advisor,  mechanical engineer, and intermediary between prominent individuals, states and institutions. This archive provides new insights into the workings of colonial overseas railways, including documents relating to the design of 4-8-4 locomotives—potentially the only surviving documents of the era’s Kuomintang-led railways outside China – and Cantlie’s involvement in the infamous Leith-Ross Mission.

The papers of Sir Frederick Leith-Ross, part of the official Treasury papers at the National Archives, confirm Cantlie’s involvement with the Leith-Ross mission (Figures 3 and 4).

Figure 3.         Sir Frederick Leith-Ross’ appointment book from 1936 during his mission to China 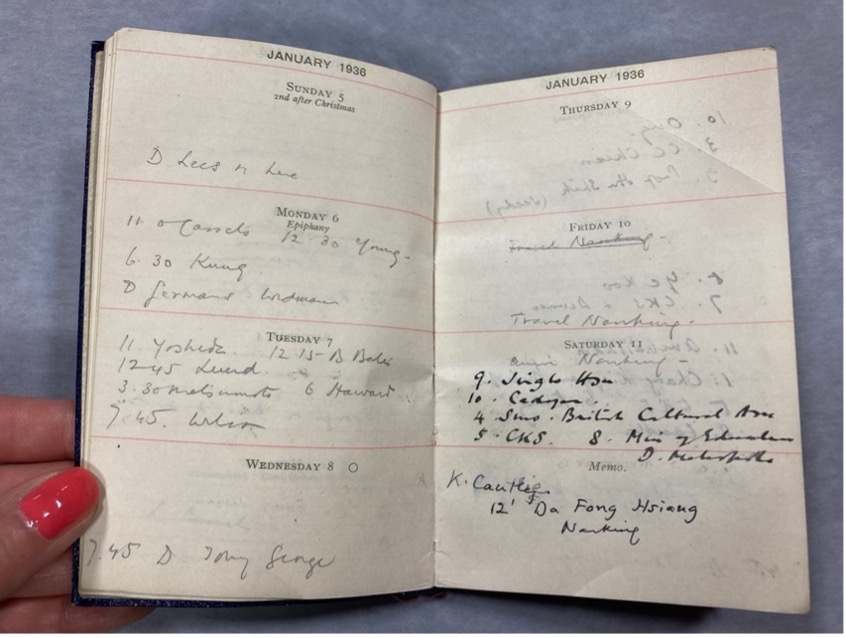 My research seeks to determine whether Cantlie was central or peripheral to the Leith-Ross Mission, and to assess his influence with the British and Chinese governments. I will also examine archive collections held at the School of Oriental and African Studies (London),  the China Association papers, and a sample of the papers belonging to the John Needham collection (University of Cambridge).