by Steven Toms (University of Leeds)

Manufacturing and finance in Britain have long experienced an uneasy relationship. My recently published book, Financing Cotton, reveals the interdependence between technology, profitability, and capital accumulation, in the cotton industry from the industrial revolution to the recent past. 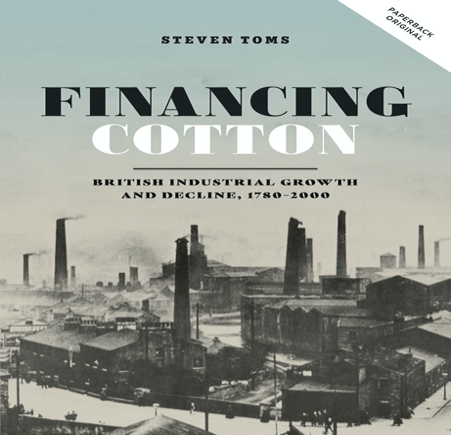 As industrialization began, high but risky profits accrued to entrepreneurial merchants with pre-existing dominance of domestic weaving networks, enabling them to develop their financial power and control by promoting first turnpike roads and subsequently railways. The development of steam-powered mule spinning, offered new profit opportunities to the same individuals. Automation in spinning provided higher financial returns for early adopters, but these advantages lasted only a few years as new producers entered the industry. The automation of weaving, which occurred a few decades later, brought no similar uplift in profits.

A particularly profitable business model was the adoption of co-operative manufacturing after 1850. Successful mills blossomed in the Irwell and Rossendale valleys before the US civil war, after which co-operative cotton spinning expanded rapidly in Oldham and surrounding townships. High profits benefitted the operatives for a sustained period, but the more challenging economic circumstances of the mid-1880s sapped confidence. Former advocates of co-operation became entrepreneurs, buying distressed mills cheaply and promoting wave after wave of new mills when boom conditions returned in the 1900s.

Virtually all pre-1914 expansion was financed locally and regionally. As capital accumulated and entrepreneurs constructed multiple mill empires and associated businesses, they reduced their already minimal dependency on London.  Manchester was always significant as a commercial centre, while Oldham and its informal stock exchange provided industrial finance on a vast scale.

From the earliest stages of the industrial revolution, there were significant connections between Lancashire and Scotland. These collaborations supported innovation and provided finance, with the latter becoming more critical over time.  The Scottish thread giant, J&P Coats, which controlled subsidiaries in Lancashire besides Scotland and North America by 1900, increasingly performed a venture capital function by using its financial muscle to buy controlling interests in rival companies, thereby consolidating its market power, and boosting its profits.

By 1914, multiple business groups had also emerged in Lancashire. They made only limited investments in new ring spinning and automatic weaving technology, even though these proved profitable. Instead, as before, finance went from regional investors into specialized mills, not into vertically integrated units. Specialization was a sufficient condition for financial success. Entrepreneurs only adopted ring spinning in areas like Rochdale, where continuous throstle spinning had previously predominated, to produce specific products.

After 1920, the industry faced declining market conditions. However, this is not to say that profit opportunities disappeared. For the first time, vertically integrated firms began to outperform their specialized counterparts. Automation of intermediate processes made this a feasible investment strategy, from a technical perspective, but prior sunk investments acted as a significant obstacle. Firms that restructured, demerged, or cleared debt, were more successful.

Another vital obstacle to vertical integration was unstable and shrinking markets. Entrepreneurs were, therefore, reluctant to commit to the fixed costs of larger, vertically integrated factories. A brief post-war boom wiped out the debt overhang, and a government scrapping scheme of 1959 provided the opportunity to restructure and rationalize the industry. What remained of the cotton industry was now integrated with, and financed by, textile conglomerates. Briefly, vertical production and stable markets promoted investment in new technology that paid-off in terms of profitability up to the early 1970s. Renewed market uncertainty, including British entry into the European Common Market, undermined this model.

The domestic market was still large enough to support some residual capacity, and strategic alliances between textile conglomerates and retailers persisted. Retail giant Marks & Spencer sustained a network of associated textile factories, through regular orders which stabilized production runs and promoted investment, leading to further profit opportunities for producers. The model collapsed in the 1990s following trade liberalization and resourcing overseas by the major retailers.

A handful of producers survived. One of the last, Shiloh plc, invested continuously in modernizing production, but eventually succumbed to a flood of cheap imports, even as labour costs became increasingly insignificant. Symbolically, one of Shiloh’s last mills made way for a retail park. Peel Mills, a former production group became Peel Holdings, responsible for the regeneration of the Manchester Ship Canal corridor, favouring retail and service industries.

In recent times, as over the longer run, survival and success remain a matter of balancing fixed capacity against variable demand. Reflecting the international appeal for authentically ‘British’ products, retailers began pushing orders back up through the value chain. Tower Mill in Dukinfield, which opened in 1885, and reopened in 2015, stands testimony to two very different industrial development phases.