Food and aviation in the Twentieth century: the Pan-American ideal

January 27, 2021 | Blog
Home > Food and aviation in the Twentieth century: the Pan-American ideal

Airline food. Everyone seems to have an opinion on it, and appraisals are usually negative.  In an age of cheap, no-frills flying, not to mention the restrictions placed upon the aviation industry by the Covid-19 pandemic, it’s easy to forget that dining in the clouds was once a very pleasurable experience.

But why study this topic at all? My conviction is that what may seem at first glance like a niche topic is in fact a universal phenomenon. While most people recognize the role of air travel in ‘making the world a smaller place’, few stop to consider how the food in the plastic container on the tray table in front of them is symbolic of globalisation. Greater global interconnectivity, whether termed globalisation or transnationalism, was one of the great distinguishing features of the twentieth century, in which technological advances meant that national boundaries collapsed and the frequency of economic and social exchange between peoples increased. The transit of food by air, and the eating of different cuisines while airborne, was  — and remains — a potent symbol of this process.  However, the role of food in the aviation story has hitherto escaped academic attention.

I started researching this theme because, as a social and economic historian, I felt that the topic had been seriously overlooked. After I commenced my research into food and aviation it became increasingly clear to me that it demanded more than a general history: it required an in-depth study exploring how the USA, and especially Pan Am, occupied a hegemonic role in the post-war world (Figure 1). 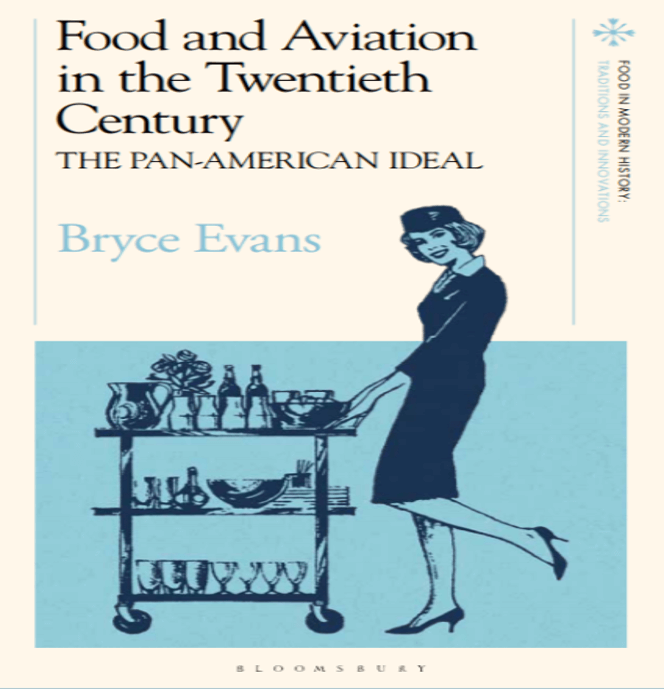 My case study is, therefore, an American institution regarded by some as ‘the greatest airline the world has ever seen’: Pan American World Airways. Established by New York stockbroker Juan Trippe in 1927, the Pan Am brand still holds clout despite the company collapsing in 1991. Pan Am is important because it became the global emblem of the ‘golden age’ of air travel and its famous blue globe logo, as is often remarked, became the second most recognisable American brand after Coca Cola. The story of Pan Am is the story of US-led globalisation and imperial expansion in the twentieth century, with the airline achieving the vast majority of ‘firsts’ in aviation history, pioneering transoceanic travel and new technologies, and all but creating the glitz, style, and ambience eulogised in Frank Sinatra’s ‘Come Fly with Me’. Accordingly, much of my research has been conducted in libraries, including two presidential libraries, and archives in the USA,

My research investigates an aspect of the airline service that was central to the company’s success, its food; a gourmet glamour underpinned by both serious science and attention to the detail of fine-dining culture. Modelled on the elite dining experience of the great ocean liners, the first transatlantic and transpacific flights featured formal thirteen course dinners in Art Deco cabins, served by waiters in white waist-length jackets and garrison hats. Scientific innovation was key. Technological progress marched in tandem with greater efficiencies in food preservation and nutritional understanding. As flight times declined, altitudes increased, and the world became ‘smaller’, Pan Am pioneered the design of hot food galleys and commissioned research into how altitude and pressure affected taste buds, amending menus accordingly.  The success of Pan Am was partly based on collaboration with chefs from the best Parisian restaurants and the wining and dining of politicians and film stars.  Consequently,  I argue that the company played a significant role in collapsing the culinary (and economic) boundaries between the Old World and the New World, as well as transforming ideas about the very essence of food.

At the same time, my research also documents the ‘darker side’ lurking behind this American corporate behemoth. I’m interested in what food service was like not just for consumers but for flight attendants themselves, and I want to explore how the golden age of airline dining was underpinned by a racist and sexist culture. The glamour and razzamatazz of public aviation history tends to obscure the fact that cultural, or ‘soft power’, functioned in tandem with economic power, and Pan Am played a lead role in what some historians have termed ‘Coca Colonization’ or, to put it another way, the US-led imposition of global sameness.

I am still carrying out research for this project using digitally accessible material while awaiting the reopening of American archival institutions.  Although the focus of the work is Pan Am, I also pursue a comparative angle vis-à-vis European carriers, so there is plenty of research material ‘this side of the pond’ as well.  Ultimately, my research might not succeed in changing opinions on the palatability of airline food, but it will, hopefully, change the way we understand it.