Funding for the project on which this blog is based was provided by the Economic History Society’s Carnevali Research Grant.

Who are the wealthy?  This question has been central to understanding social frictions since long before current debates about  inequality and the influence of billionaires in politics.

Probate records are the essential source of information for the study of wealth in Victorian Britain.  Yet, despite their heavy utilisation, there remains a great deal of untapped potential. This project aims to expand the information available to scholars about wealth in the aftermath of the Industrial Revolution.  Gathering data from probates by hand is time-consuming, and the most extensive studies have focused on only the top 0.1% of the population. Computerised attempts, while more exhaustive, have only been able to extract basic information, such as the wealth and name of the deceased.

Using a combination of image recognition, optical character recognition, regular expressions, and machine learning, we can extract significantly more data.  In addition to wealth, we gather information on occupation, location, and civil status.  Further, we extend the period  covered by probates to 1858-1908, and provide geographically disaggregated data.  The more complete data we collect allows us to address various issues.  We can estimate the coverage of probates by occupation, district, and age group. This provides new insights on wealth accumulation over an individual’s lifetime and helps identification of occupations that became obsolete, and therefore less financially rewarding.

Probate records were the principal means of legally recording the value of an individual’s estate at death.  Every death involving an estate valued over a given threshold was recorded alongside details on the value of that estate, the deceased, and the executor of the will.  But while probates are the most complete source for studying wealth in this period, a key difficulty is that the probates do not cover the entire population, and the age at death is unknown.

Our pilot study currently comprises 644,147 observations including wealth, address, and (preliminary) occupation between 1861 and 1881, during which the probate threshold was £5. During this period, mean probated wealth was relatively constant. The mean wealth reported in our data is very similar to official aggregates, suggesting the digitisation process is mostly successful.

Figure 1  shows our results for the number of wealth-holders dying in each county with wealth over £10,000 between 1861 and 1881, per million people (all figures in 1881£). This clearly demonstrates the concentration of wealth in the south, particularly in and around London. While there are some northern exceptions, notably Lancashire, a clear north-south divide is evident even in this early period.  There are a small number of individuals dying with extreme levels of wealth.  For example, in 1865, Richard Thornton died with £2.8m (£5.5bn in today’s terms). 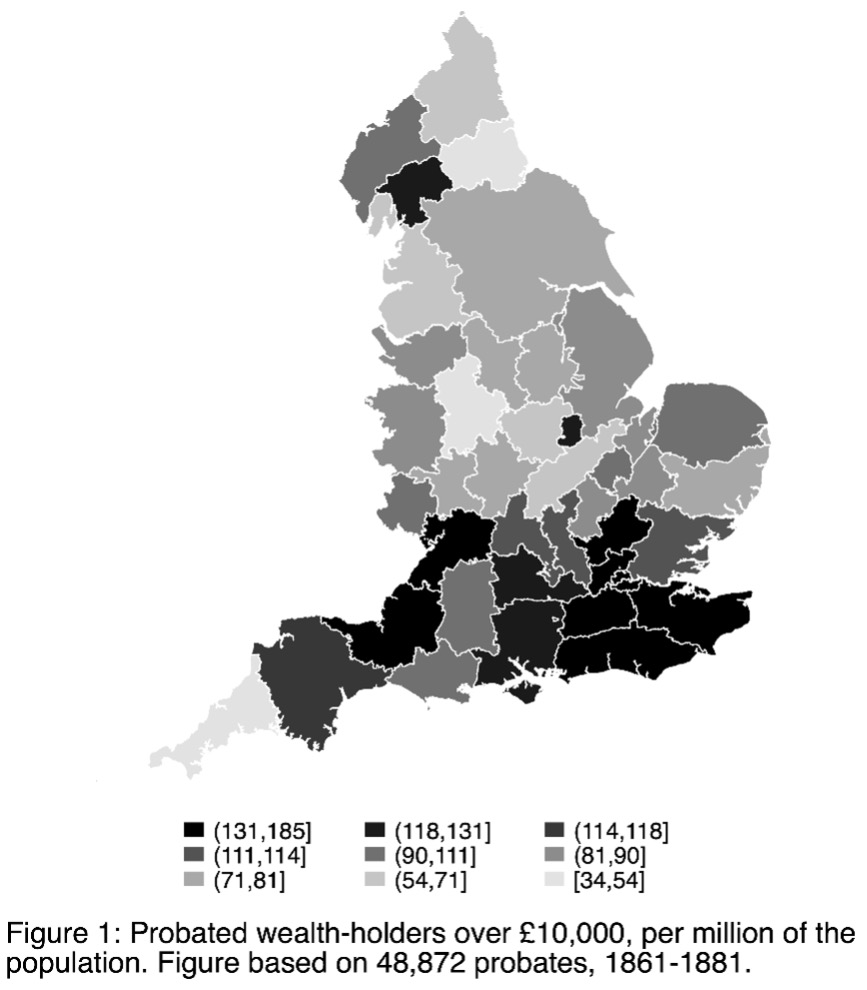 Table 1 shows the development of probated wealth in the Greater London region (consisting of London, Middlesex, Kent and Surrey) compared to the rest of England.  The mean wealth of all probated persons does not show a strong upward trend,  partly because the share of probated persons in all deaths rises over time.  To isolate the growth of wealth, we compute the 99th percentile of wealth in all deaths for a given year, assuming that all the wealthiest appear in the probate data.  This figure rises considerably in the decade from 1871 to 1881. The change is most pronounced around London, where the wealth required to be in the top 1% grows more than elsewhere.

A positive relationship between population density and probated wealth applies across counties (Figure 2). While the relationship is strong, two groups of outliers emerge from the data: southern and northern counties.

We plan to extend the analysis to 1908 using our machine-learning dataset, and to gather information on age at death to match with probates.  This research will help address several interesting questions, including the relative growth of commercial and industrial wealth, and the impact of local government reforms on the wealth of those who benefitted from public spending in London.