Poverty, Pollution, and Mortality: The 1918 Influenza Pandemic in a Developing German Economy

by Richard Franke (University of Bayreuth)

This blog is based on the author’s presentation to the Economic History Society 2021 conference.

The 1918 “Spanish Flu” was the deadliest pandemic in modern history.  Widely cited estimates on the global mortality burden range between 50 and 100 million deaths (Johnson and Mueller, 2002).  This large range is partially driven by sparse data for developing countries in Africa and Asia, especially China.  Besides the large variation in global mortality estimates, local mortality rate estimates show more pronounced  variation across and within countries.  To date, the factors influencing the varying regional severity of the pandemic have not been fully explored.

In this paper, I provide a detailed description of mortality statistics in the Kingdom of Württemberg.  Moreover, I focus on the impact of poverty and air pollution on regional mortality rate differences.  Both factors have received much attention also in current debates on regional differences in pandemic mortality.

The Kingdom of Württemberg was one of the four Kingdoms of the German Empire and the third largest after Prussia and Bavaria.  The 1918 influenza pandemic reached the South-West German Kingdom in June 1918.  A second, more deadly wave followed in October 1918 with  the third and final wave arriving spring 1919. The pandemic hit a population that had been starved by the war and had lost about 14 percent of military-age males as a result of the conflict. In combination with censored media, these circumstances might explain why the public perceived the pandemic as a minor problem. 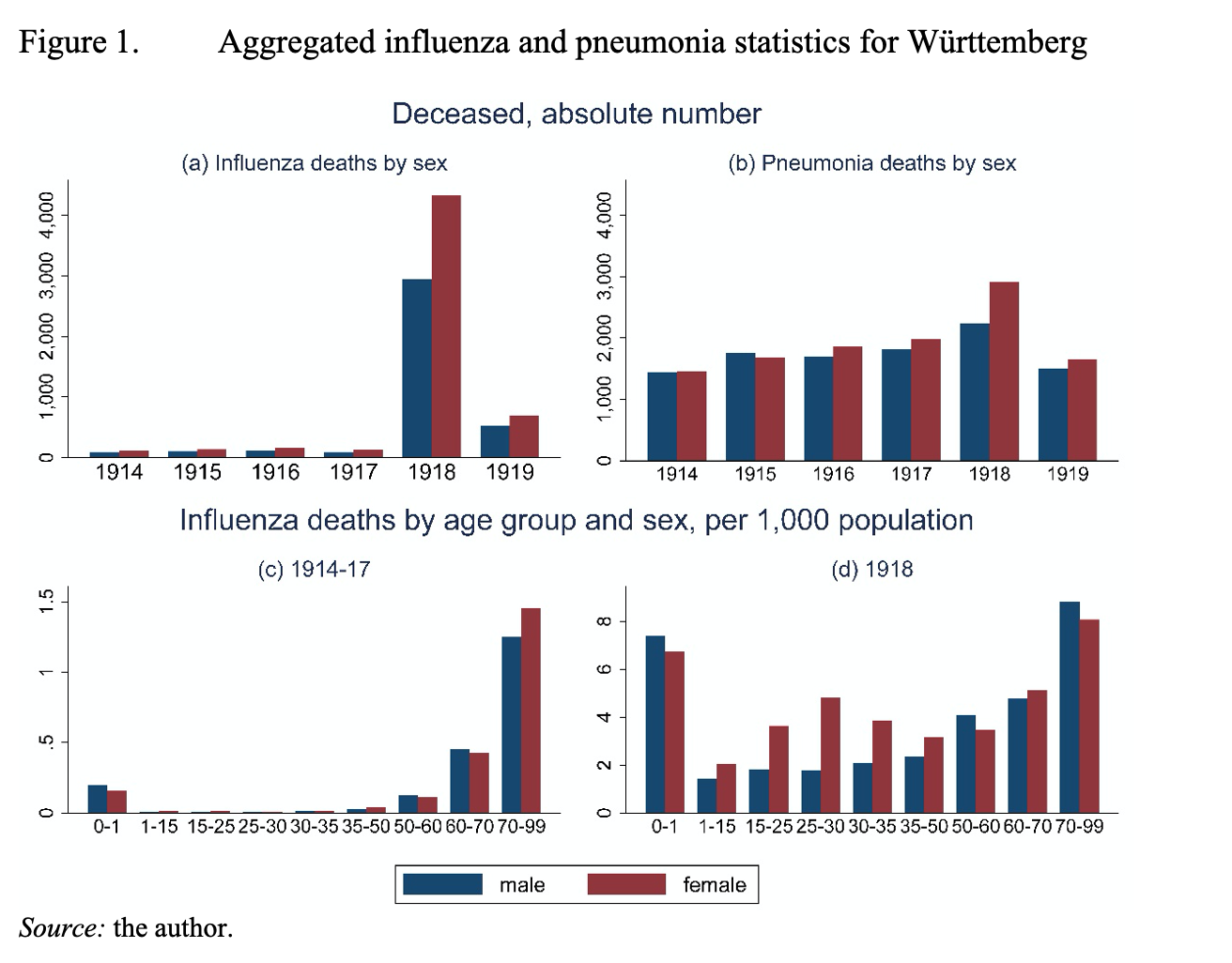 My research involves the application of several methods previously used in the literature to estimate excess mortality in 1918. My results indicate that excess mortality was between 2.3 and 4.1 additional deaths per 1,000 persons during the pandemic. These estimates are at the lower end of those suggested for Germany and its states.

Figure 2 illustrates the annual mortality rate per 1,000 persons for three groups of parishes in Württemberg, those with low, medium, and high levels of air pollution. Pollution is measured as installed coal-fired power plant capacity within 50 kilometers of the respective parish. 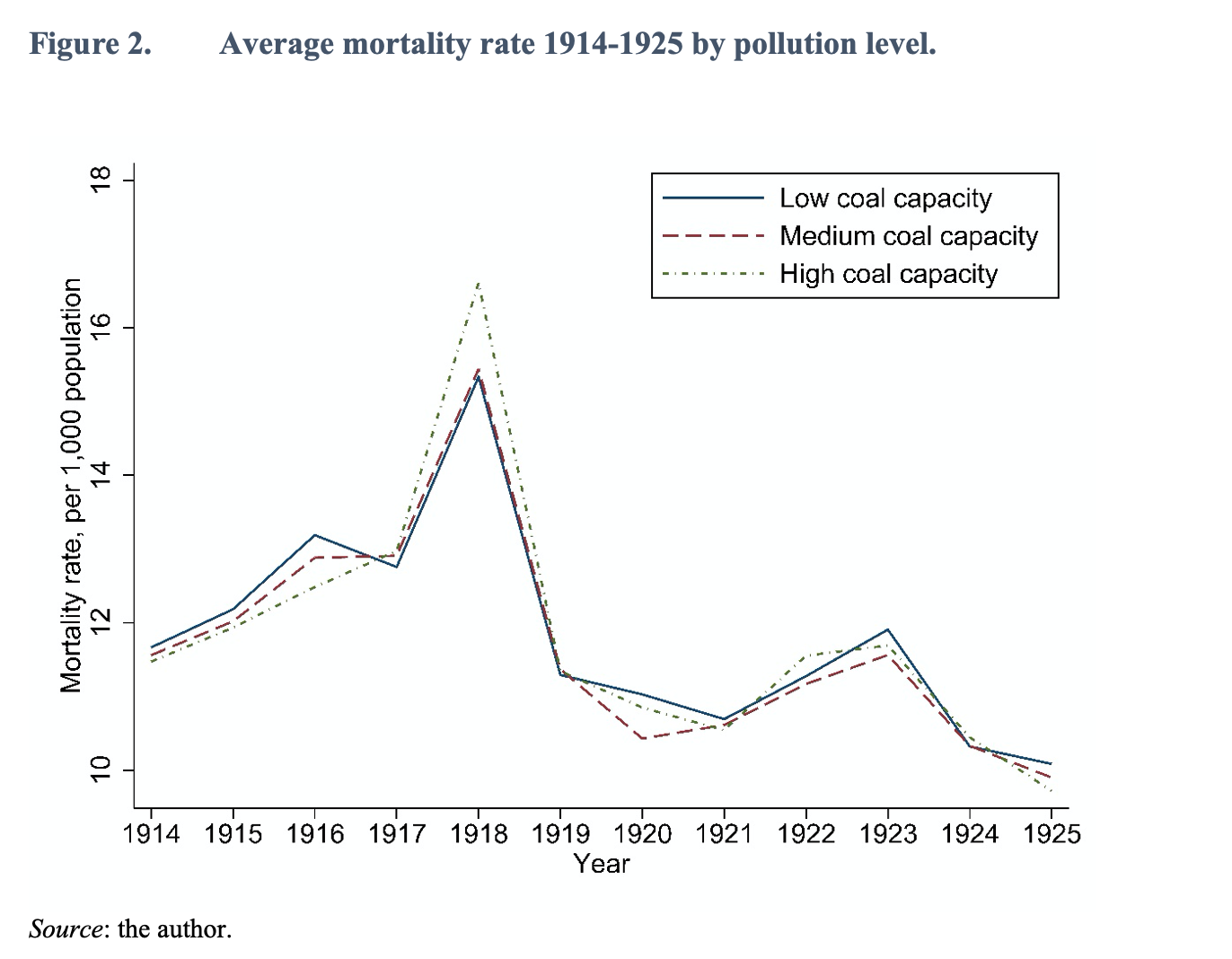 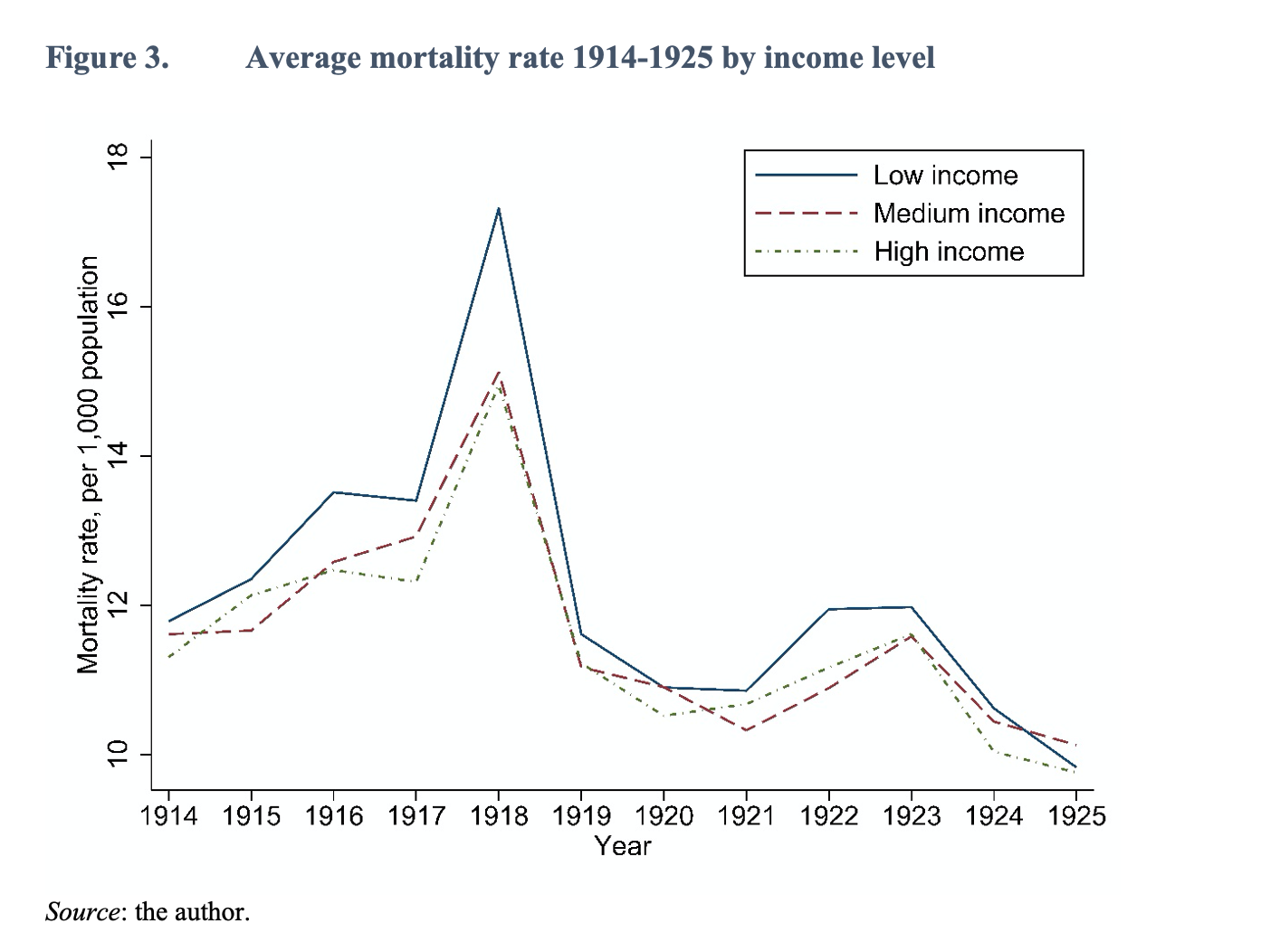 There is evidence that we observe similar income and pollution effects in the current pandemic. The findings presented in my paper call for more decisive political action to mitigate the health risks of air pollution and low income.