This blog is based on research funded by a bursary from the Economic History Society. For more information about funding opportunities, please consult out Grants & Prizes section

Did technological unemployment sweep across England in the wake of the British Industrial Revolution?  We don’t know. The extent to which the new machines replaced workers, leaving them temporarily unemployed, has never been quantified. Recent scholarship refers to the technological unemployment which caused devastating short- term harm to workers during the Industrial Revolution (Frey 2019), while other studies  doubt the scale of this innovation (Mokyr et al, 2015).

The English boot-making industry mechanized over the second half of the 19th century, rendering a range of traditional skills obsolete. Fortuitously, the timing of this transition coincided with British census taking, so it is possible to identify the scale and long-term impact of technological unemployment amongst English bootmakers.

My project adopts a new approach to categorizing individual level occupational data in the English census, allowing the identification  of jobs lost to mechanisation.  I process census data digitized by the Integrated Census Microdata project (Schürer & Higgs, 2014), to identify the ‘tasks’ carried out by 1.16 million English bootmakers (90 per cent of bootmakers in England),  between 1851 and 1911.  Preliminary results suggest that approximately 30,000 female bootmakers experienced technological unemployment, while 110,000 male bootmakers experienced labour displacement. The most rapid decline in employment was experienced by binders and cordwainers (Figure 1).

Binders manually sewed together the leather pieces which formed the upper part of the boot. In 1852, in the United States, the Singer sewing machine mechanised this process (Thomson, 1989). Although concerted resistance from organised labour prevented the introduction of the machine to England in 1855, it was in employment by 1858. Thereafter, the number of binders in England dropped precipitously and nearly every county in England lost 90 per cent of its binders. Simultaneously, a new occupation – sewing machinist – a predominantly a female occupation, emerged in the census.

Could binders retrain, and become Sewing Machinists? If they did, they would need to migrate: Binders were employed throughout England, but employment as a sewing machinist was heavily concentrated in the boot-making centres of Leicestershire and Northamptonshire (Figure 3). 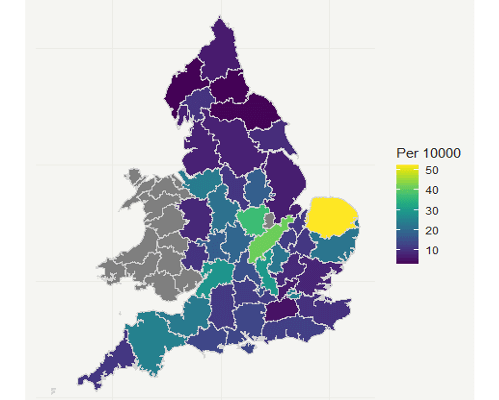 Similar geographical trends are apparent for male bootmakers. Cordwainers (predominantly male), were likely made obsolete by increasing specialisation rather than by a particular technological innovation. Cordwainers were employed throughout Britain, but the new, more specialised tasks, were centred on Northamptonshire and Leicestershire. These counties each gained more than 30,000 bootmakers during this period. In aggregate, as employment in the old jobs declined, and employment in the new jobs surged, the geographical dispersion of employment opportunities in the industry experienced a substantial shift (Figure 4).

How did workers react to the spatial and technological restructuring of the boot-making industry? Did they relocate to keep working in the industry they knew? If so, which segments of the labour market were able to migrate? Were women as likely as men to migrate in search of the new work opportunities? Was the propensity to migrate influenced by age and/ or marital status? Did some male bootmakers find it easier to migrate in search of the new jobs?
The Economic History Society has granted me research funding to visit archives in Manchester and Warwick to address two specific questions: First, were unionized bootmakers better able to retain employment as the industry mechanised? Second, did the trade union provide funds to enable unemployed bootmakers to travel in search of new employment?

Frey, C. B. (2019). The technology trap: Capital, labor, and power in the age of automation. Princeton University Press.