This blog post is based on the chapter ‘The international lender of last resort between Scylla and Charybdis’ in the authors’ co-edited volume (with Rick J. Michalek): Moral hazard: a Financial, legal, and economic, perspective (Abingdon: Routledge, 2022) 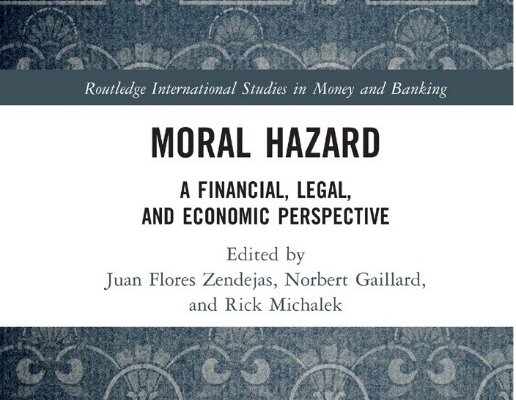 During the late nineteenth century, central banks were increasingly committed to banking stability and the gold standard. During the Baring crisis, the Bank of England and the British government monitored the negotiations between a bankers’ committee and Argentina’s national government. The resulting bailout agreement imposed certain macroeconomic conditions, mainly related to fiscal and monetary policies (Flores 2011).

In most cases of sovereign defaults, European governments maintained a hands-off attitude. Bondholder associations negotiated with borrowing governments. Their capacity to enforce settlements stemmed from the General Purpose Committee of the London Stock Exchange, which could exclude a government from having access to London’s capital market (Flandreau 2013). International cooperation between investors served to expand this exclusion to other capital markets, if necessary (Flores Zendejas et al. 2021). Moreover, underwriting banks were also likely to cooperate with bondholders and supervise the negotiations with foreign governments.

These market mechanisms worked relatively well to fight debtor moral hazard. The threat of foreign intervention was also a major deterrent to default. The risk of creditor moral hazard was key to understanding why the British government abstained from intervening on behalf of its bondholders. Lord Palmerston, the British Foreign Secretary in the 1840s, referred to a creditor moral hazard argument to defend this policy. While he could offer diplomatic support to bondholders, such support remained discretionary. In addition, he considered that the losses stemming from defaulted bonds were the consequence of investors’ imprudence. Furthermore, he stressed that the absence of governmental intervention was a ‘salutary warning’ to creditors.

During the 1920s, the League of Nations granted loans to Central Europe and Latin America, provided the borrowing governments implemented a stabilization programme, including the achievement of budgetary balance and the stabilization of the exchange rate. To some extent, this conditionality was designed to help the recovery of the economy, but it was also to provide investors with sufficient guarantees to finance the schemes. The League was not endowed with its own capital and was constrained as an international lender of last resort (ILOLR). This feature  implied that the risk of either debtor or creditor moral hazard was limited. When the financial and economic turmoil of the early 1930s erupted, the fragilities of the League became obvious.   Borrowers needed urgent and massive assistance which the League was unable to provide (Flores Zendejas 2021). The establishment of the Bank for International Settlements (BIS) in 1930 complemented the League’s work. In fact, whereas the BIS had begun lending to countries facing liquidity shortages, it rapidly suspended these operations as it perceived that most borrowers were facing structural imbalances.

Between 1944 and 1945, the main economic objectives of Western leaders and policymakers were to reconstruct Europe and restore multilateralism. This entailed a new international financial architecture around the World Bank and the International Monetary Fund (IMF). These two institutions helped to reduce information asymmetry and debtor moral hazard problems.  This multilateral approach was complemented by the establishment of the Paris Club in 1956, which brought together creditor countries in order to increase cooperation and deal with debtor problems. During the period from 1956-72, twenty-two multilateral debt renegotiations, involving nine countries, were reached (Klein 1973). As these renegotiations were frequently part of a global economic stabilization plan, they could be accompanied by standby arrangements. It is important to note that creditor governments were also prone to make new loans to distressed debtors.

Three lessons can be drawn from these debt renegotiation episodes. First, conditionality was obviously a key element of IMF loans, but debt restructurings were not a taboo: official bilateral creditors consented to some ‘haircuts’ to avert outright default or repudiation. Second, the World Bank and the IMF were considered senior creditors by the international financial community.  Finally, there was no de facto or de jure ILOLR likely to bail out distressed debtors.

The emergence of an ILOLR scheme in the immediate post-Bretton Woods period was a complex, empirical, and desultory process. The strains on the international financial system, and  growing public debts in less developed countries convinced policymakers to develop country risk assessment (Gaillard 2020), enhance cooperation, and contemplate new forms of emergency liquidity provision and last-resort lending (Boughton 2001).

In 1982, following Mexico’s moratorium, Jacques de Larosière, Managing Director of the IMF, stated that the Fund could not rescue the country unless Mexico’s creditors agreed to provide $5 billion complementary financing. Commercial banks surrendered, and the Fund approved a $3.8 billion arrangement. This ‘cooperative scheme’ was, to various degrees, applied to other distressed debtors. Further, the scheme marked a watershed in the history of international finance as the IMF acted as crisis manager and ILOLR-in-chief. Subsequently, the ad hoc functions of the IMF were confirmed in two ways. First, it established diverse new credit arrangements. Second, the Fund reinforced its role as a crisis manager, for example, in the Tequila and Asian crises in 1994-7.

However, the turmoil that engulfed South Korea was especially serious, partly because of Seoul’s reluctance to request IMF assistance. The standby arrangement approved on 4 December 1997 fell short of stopping the financial panic. It was not until 29 December, when the Federal Reserve rolled over short-term debts, that risk aversion declined (Sachs 1999).

Despite the harder terms of IMF conditionality imposed on distressed sovereign debtors (Boughton 2001), the rescue packages of the late 1990s exposed several shortcomings of the ILOLR-in-chief function performed by the Fund. First, the financing of the Washington-based institution had become a major concern. Second, the ILOLR mechanism did not prevent massive sovereign defaults, for example, Russia in 1997-8 and Argentina in 2001. Finally, contrary to the modus operandi enforced during the 1982-3 debt crisis, the bailouts of 1994-7 did not involve private creditors.

Financial globalization and the increasing power of too-big-to-fail banks since the 1980s have combined to encourage creditor moral hazard. This trend has been overlooked by the IMF, which has placed greater emphasis on preventing debtor moral hazard. The accommodative monetary policy implemented by the Federal Reserve—the de facto ILOLR since 2008—has even exacerbated the creditor moral hazard problem (see Gaillard and Michalek 2019) and undermined the long-term stability of the international financial architecture.

Sachs, J., ‘The international lender of last resort: what are the alternatives?’ In J.S. Little and G.P. Olivei, eds., Rethinking the international monetary system (Boston: Federal Reserve Bank of Boston, 1999).