Railroads and the regional roots of China’s inequality: Evidence and debates from the Late Qing Dynasty to Contemporary China

March 24, 2021 | Blog
Home > Railroads and the regional roots of China’s inequality: Evidence and debates from the Late Qing Dynasty to Contemporary China

This blog is based on research made possible by the Research Fund for Graduate Studies, funded by the Economic History Society.

By Lena Chen (University of Cambridge)

Fernand Braudel reminds us that economies have changing borders and that there are often areas not included in the world economy.  This is the case with China: coastal cities have enjoyed prodigious growth on account of the sacrifice of interior regions.  Indeed, the preferential policies for coastal cities acted as a devastating discrimination that suppressed the interior’s economic vitality.

In this project I investigate how inequality is determined by incentives created by both economic and political institutions, and the ways by which  the railroads delivered stark disparities between towns.  The railroad occupies a central role in a wide range of literature covering Europe, the US, as well as India and Japan.  But similar treatment is rare  for China.  There are grounds for believing that the traditional, causal relationship between railroads and economic growth does not apply to China.  Inspection of the limited railway network in the Late Qing period in 1900 (Figure 1),  encourages us to re-assess how the railways affected the development and living standards in landlocked regions that became overshadowed by the flourishing treaty ports and coastal cities. 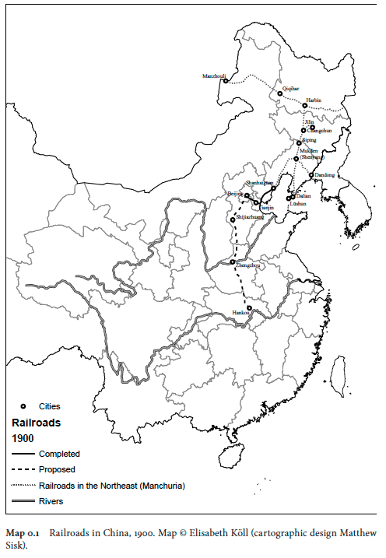 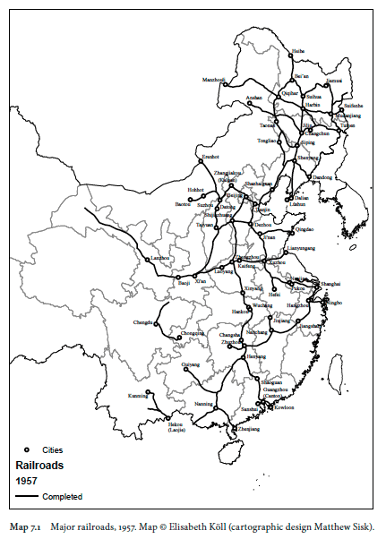 The emergence of the railroads from the last decades of the Qing dynasty to the first years of the Republic after the 1911 revolution, was a consequence of both foreign imperial invasion and domestic politics.  In the semicolonial background the railroad as a business institution mostly benefitted foreign powers.  Between 1910 and the interwar period, railroads  had an economic function – the transportation of commodities to the market, and  an ideological function – the transmission of modern capitalist ideas.  Between  1927 and 1937, social and political changes under the Kuomintang government, and the Sino-Japanese War, were reflected in the destruction and construction of the railroads.  After the exhaustive civil war, the Communist Party spared no effort to stabilize the economic and social environment by developing the railroad network.  Mao turned to Stalin for assistance. With the managerial, technical, and administrative expertise from Soviet Union, the railroads soon expanded to be a military-industrial complex. The architects of the Great Leap Forward of the late 1950s envisioned rapid economic growth, but the limits of the rail system quickly deflated these expectations.   Mao’s target of doubling steel production required massive deliveries of raw iron and coal that soon overwhelmed the rail system.  Roderick MacFarquhar in his trilogy on The Origins of the Chinese Cultural Revolution noted that:  ‘In 1959-60 coal accounted for 40 per cent of the total volume of railway freight.’  After the ideological disagreement that caused the Sino-Soviet split, and at the peak of Maoist radicalism, the railroads were no longer a guaranteed path for transmitting socialist values to the post-revolutionary population, as every profession connected to the railroad system was characterized as counterrevolutionary with bourgeois ideology.

My proposed project on the history of regional inequality, and the political economy leading to different outcomes, will challenge historical narratives that make growing regional inequality seem inevitable.  By understanding the debates on this topic, and analysing the relevant data, I hope to develop a paper that will  place the reforms of 1978 into a broader and more convincing  historical context.

Fogel, Robert William. ‘A Quantitative Approach to the Study of Railroads in American Economic Growth: A Report of Some Preliminary Findings.’ Journal of Economic History 22, no. 2 (1962): 163-97.